As described in the section Creating Join Views, when creating a join view you can specify its execution strategy in the “Join Conditions” tab of the wizard. The execution strategy of a join operation has two parameters (see section Optimizing DF Data Sources for more details):

For these parameters, if you select ANY, the Server selects the option that considers appropriate.

Let us also suppose that queries on V3 are using the nested execution method. Common optimization practice on using this execution method involves ordering the input relations so that the first is the one to provide least tuples to the join operation.

In our example, suppose that the number of input tuples to the join from V1 is normally less than that of V2 and, therefore, V3 is usually queried by considering V1 as the first relation.

Now suppose that you want to create a new view V4 that is a selection view on V3 by applying the condition C= C. Also, suppose that there are few tuples in V2 that verify this condition. Then, on running a query on V4, the most common situation will be for the join view V3 to be given less tuples from V2 than from V1. Therefore, when V4 is run, V2 should be considered the first relation, unlike the general case where the opposite is sought.

To deal with these cases, in any derived view V it is possible to define the preferred run strategy for each join view involved in its definition. These strategies will only be used to run queries on V and will not overwrite the default execution preferences of these join views. 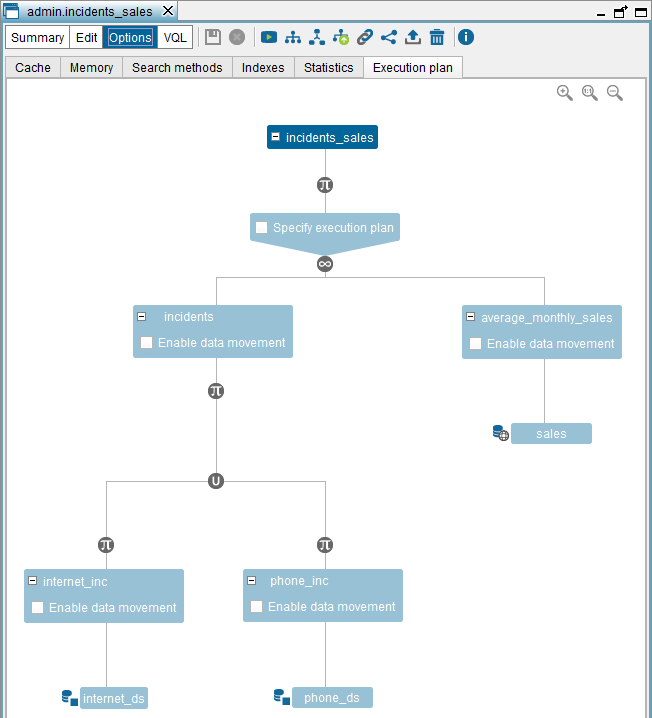 Editing the Execution Plan of a view¶

This dialog displays the view definition tree. For each join operation, you can select the Specify execution plan check box to enable the two boxes and select the execution method and the order of the input view. If ANY is selected, the Server will use its internal cost information to choose the best strategy.