When a query that uses derived views in its FROM clause, is executed and the definition of these views involves join operations, it is possible to dynamically specify an execution strategy for each operation (which changes the strategy specified when the view was created, only for this specific query).

To dynamically choose the join strategy, the CONTEXT clause with the option QUERYPLAN must be used (requires WRITE privileges over the view).

The parameter QUERYPLAN is deprecated and it is going to be removed in the next major version (Denodo Platform 8.0).

The section Features Deprecated in Virtual DataPort 7.0 lists all the features that are deprecated.

It is also possible to use the ALTER VIEW sentence (see section Modifying a Derived View) to modify the execution strategy of the joins taking part in defining a specific view. The formal syntax of the QUERYPLAN option can be seen in the figure below.

Definition tree for view V5 shows the definition tree for view V5 (this tree can be easily obtained with the Virtual DataPort Administration Tool). As you can see, there are two join operations that form part of the tree: that used on creating the intermediate view V4 (where the MERGE execution method is forced) and that used to create V5 (where the NESTED execution method is forced with V4 as first relation). 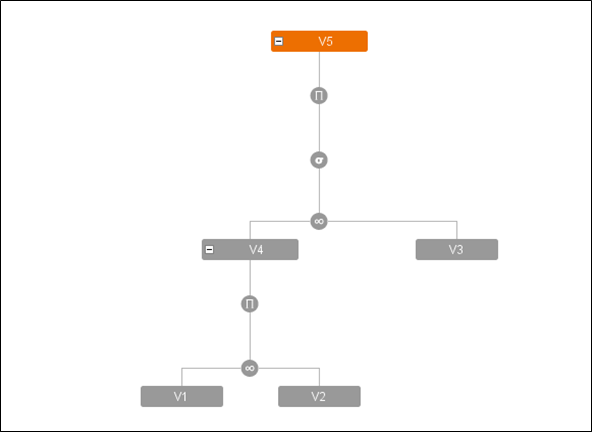 Now suppose that the following VQL query is to be executed:

In this case, a different execution strategy may be desirable for the join operations comprising the V5 tree. For example, there may be very few tuples in V3 that verify the new condition D = d. Therefore, less tuples would be expected to enter the V5 creation join from V3 than from V4. Under these conditions and only for this query, it would be wise to change the order of input relations so that V3 is considered the first relation and V4 the second.

This may be done using the QUERYPLAN option of the CONTEXT clause. The name of the intermediate view used, and the preference for the execution method and order of input relations can be specified for each join operation in the tree of this query. ANY is used to indicate that the choice is to be made by Virtual DataPort.

Hence, in this example, the V5 creation join can be forced to be run in the desired order:

It is also possible to set the desired execution strategy of the join used to create V4. For example, if you wish to set this strategy to use the HASH method, allowing Virtual DataPort to choose the order of the input relations, write: