HBase is a column-oriented NoSQL database management system that runs on top of Hadoop infrastructure, that allows you to store and process large amounts of data on multiple machines.

As usually happens in the NoSQL database world, HBase does not support SQL queries, therefore it is necessary to use a binary client API (HBase Java client API), to access the database system.

The wrapper accesses the HBase cluster through the Java API. The ZooKeeper cluster acts as a coordination service for the entire HBase cluster, handling master selection, root region server lookup, node registration, configuration information, hierarchical naming space, and so on.

In terms of connectivity this wrapper needs to be able to access HMaster to check if HBase is running. And then it contacts to ZooKeeper to learn the location of two special catalog tables named -ROOT- and .META. within which HBase maintains the current list, state, and location of all regions on the cluster. Once the wrapper has been told where the specific data resides (i.e., in what region), it caches this information and directly access the HRegionServer hosting that region.

The next diagram provides a general overview of the system architecture and the interactions between the custom wrapper and HBase: 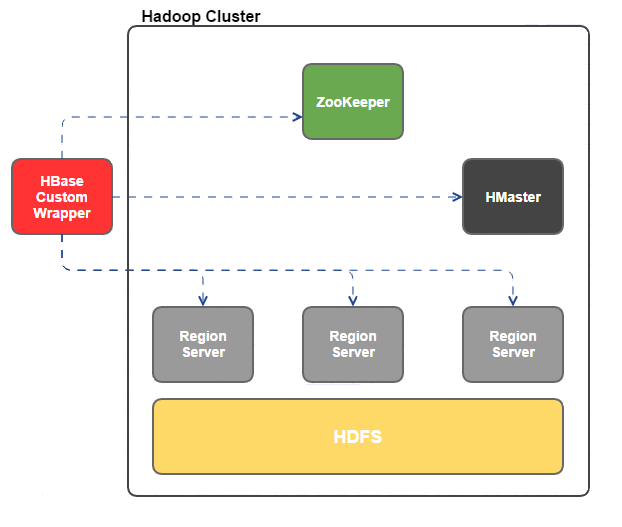 You can read more about the data model in the next link:

This wrapper allows only read operations. It can delegate to HBase the following query artifacts and operators:

Due to the delegation of the previous operators, the performance of the custom wrapper is better because many operations will be performed by HBase itself, instead of having to rely on VDP in-memory post-filtering.

There are some limitations which should be taken into account when using this wrapper:

Importing the custom wrapper into VDP

In order to use the HBase Custom Wrapper, first it is necessary to import the jar using the Admin Tool.

From the HBase Custom Wrapper distribution, we will select the denodo-hbase-customwrapper-${version}-jar-with-dependencies.jar file and upload it to VDP.

No other jars are required as this one will already contain all the required dependencies.

Once the custom wrapper jar file has been uploaded to VDP using the Admin Tool, we can create new data sources for this custom wrapper --and their corresponding base views-- as usual.

Go to New → Data Source → Custom, check ‘Select Jars’ and choose the jar file previously uploaded. The custom wrapper is implemented by class com.denodo.connect.hadoop.hbase.HBaseConnector, and it will be displayed when selecting the jar in the field Class name in this view.

The base views need the following mandatory parameters:

An example of a fragment of JSON defining an HBase table:

where post and image are column families and title, body, bodyimage, header and active are columns.

There is also a special case that allows retrieving only the row_key field of a data set for performance reasons:

This value is important if data in your HBase table is used without any HBase row key based lookups, or when your query looks for wide range scans (wide rowkey lookups). 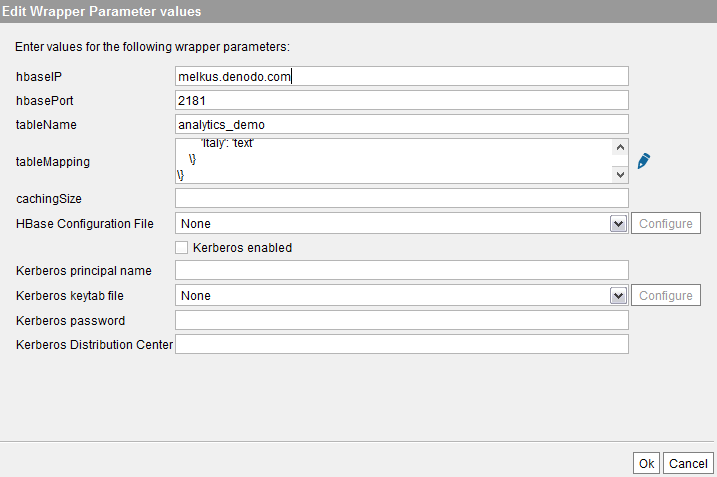 The blogposts table has the following structure. Is is represented in JSON as we will use it later for creating the base view in VDP:

The goal is to retrieve the posts where the title starts with 'Hello World'.

First we will extract those posts using the HBase Shell and then, we will show how easy it can be with VDP.

Execute this command using the HBase SingleColumnValueFilter, that takes a column family, a qualifier, a compare operator and a comparator.

The following image shows the results of this query:

For retrieving the data in VDP you have to create a base view, specifying the table mapping with the following JSON: 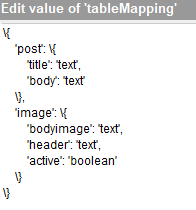 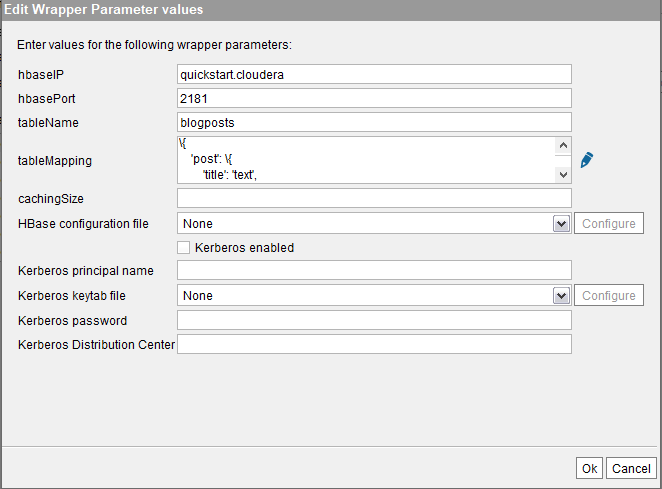 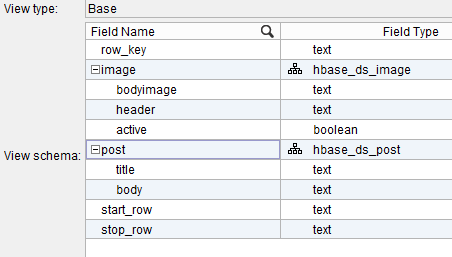 Once the base view is created, it can be used in VDP just like any other views. Let’s see a VQL sentence equivalent to the above HBase Shell command:

From the row_key values, we can check that the same results are obtained as if the HBase Shell had been used instead.

The previous image does not allow to see the array itself, it would require flattening, so here it is for the first returned tuple:

The configuration required for accessing a Hadoop cluster with Kerberos enabled is the same as the one needed to access HBase and, additionally, the user must supply the Kerberos credentials.

In this case only the Kerberos enabled parameter should be checked. The HBase wrapper would use the Kerberos ticket to authenticate itself against the Hadoop cluster.

In all these three scenarios the krb5.conf file should be present in the file system. Below there is an example of the Kerberos configuration file: 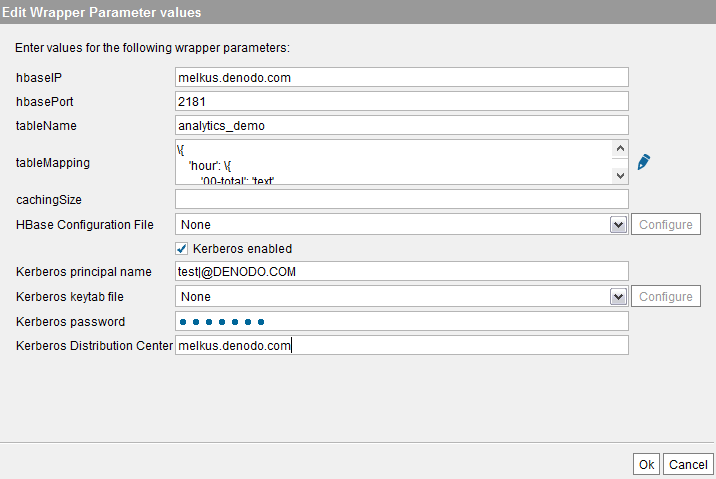 Error message: “The node /hbase (/hbase-unsecure or /hbase-secure) is not in ZooKeeper. It should have been written by the master. Check the value configured in 'zookeeper.znode.parent'. There could be a mismatch with the one configured in the master.“

This exception could mean that there is an error in the authentication, though this might not be the only possible cause. Check the value configured in 'zookeeper.znode.parent'. There could be a mismatch with the one configured in the HMaster.

Edit the configuration file hbase-site.xml and change the property zookeeper.znode.parent from its value /hbase to /hbase-unsecure or to /hbase-secure when Kerberos is enabled.

The file hbase-site.xml could be added as a parameter HBase configuration file in the custom wrapper configuration.

And you will see the following message in VDP log file: “org.apache.hadoop.ipc.RpcClient - IPC Client (...) exception { exception_class_name:

You are trying to connect to a Kerberos-enabled Hadoop cluster. You should configure the custom wrapper accordingly. See Secure cluster with Kerberos for configuring Kerberos on this custom wrapper.

And you will see the following message in VDP log file: org.apache.hadoop.ipc.RpcClient - (...) Server not found in Kerberos database (7) - UNKNOWN_SERVER)]

Check that nslookup is returning the fully qualified hostname of the KDC. If not, modify the /etc/hosts of the client machine for the KDC entry to be of the form "IP address fully.qualified.hostname alias".

After securing an HBase cluster, if user has not been given appropriate privileges, HBase access will fail with an error "Insufficient permissions for user". It is an expected behavior.

How to use the Hadoop vendor’s client libraries

In some cases, it is advisable to use the libraries of the Hadoop vendor you are connecting to (Cloudera, Hortonworks, …), instead of the Apache Hadoop libraries distributed in this custom wrapper.

In order to use the Hadoop vendor libraries there is no need to import the HBase Custom Wrapper as an extension as it is explained in the Importing the custom wrapper into VDP section.

You have to create the custom data sources using the ‘Classpath’ parameter instead of the ‘Select Jars’ option.

Click Browse to select the directory containing the required dependencies for this custom wrapper, that is:

Here you can find the libraries for Cloudera and Hortonworks Hadoop distributions: 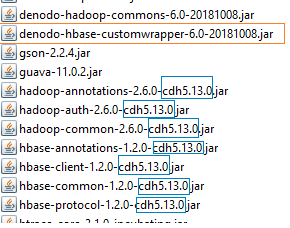 How to connect to MapR Database binary tables

From MapR documentation: “MapR Database is an enterprise-grade, high-performance, NoSQL database management system. You can use it for real-time, operational analytics capabilities.”

Add the parameter -Dmapr.library.flatclass to the VDP Server JVM options.

Otherwise, VDP will throw the exception java.lang.UnsatisfiedLinkError from  JNISecurity.SetParsingDone() while executing the HBase Custom Wrapper.

In order to use the MapR vendor libraries you should not import the HBase Custom Wrapper into Denodo. 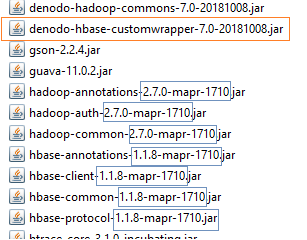 The MapR Maven repository is located at http://repository.mapr.com/maven/. The name of the JAR files that you must use contains the version of Hadoop, HBase, Zookeeper and the version of MapR that you are using.

The dependencies required for the MapR data source are:

As MapRClient native library is bundled in maprfs-<MAPR_VERSION> jar you should use the  maprfs jar that comes with the Mapr Client, previously installed, as the library is dependent on the operating system.

Configure the HBase wrapper parameters as usual, with these three main differences: 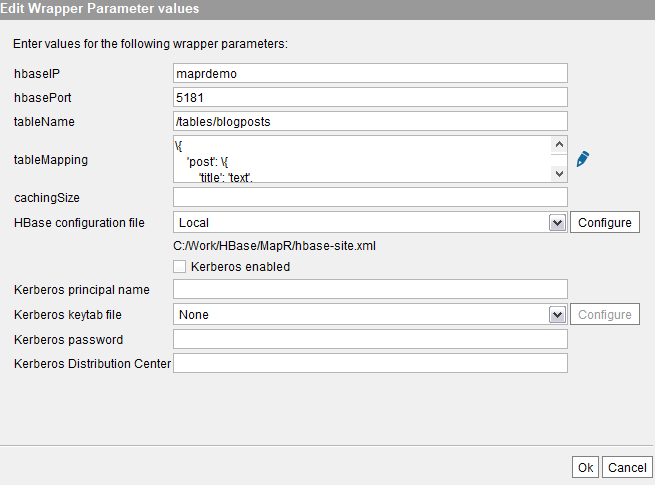