The Elastic Kubernetes Service (EKS) is a service provided by Amazon AWS that supports deploying Kubernetes clusters in AWS. EKS has become the default technology when working with AWS + Kubernetes due to its ease of use and its integration features with other AWS services.

Also, since EKS is a certified Kubernetes conformant, any standard Kubernetes application can be easily migrated to EKS without the need of any code refactoring.

In this article we will show how to create a Kubernetes cluster in EKS using the AWS Command Line Interface, and how to deploy a Denodo Kubernetes application in it.

Although it is also possible to manage the EKS resources from the AWS portal, in this article we have chosen to use the AWS CLI because usually, the commands are self-explanatory and also because it is possible to use these commands and test them easily in any custom AWS deployment.

Note that all the below statements are AWS CLI commands, so they can be copied into any environment to create a Denodo cluster in AWS.

The Kubernetes deployment is organized in three main parts:

This article assumes that there is an environment already configured with the tools required to deploy a Docker image of Denodo in AWS, in other cases, it might be needed to install or configure something else before continuing with the next section. In summary:

An IAM entity (user, group or role) must be set up with the necessary privileges required by the AWS CLI for running the statements in this guide.

In this example, we have configured an IAM Role (roleARN) to use ECR and EKS services.

This IAM role must be able to list, push and pull images in the ECR repository, which is granted with the following AWS managed policy:

The AmazonEC2ContainerRegistryPowerUser allows read and write access to repositories, but does not allow other actions such as actually creating the ECR registry. For that, we need to assign the following IAM action to the role:

Also, if the Service Linked Role "AWSServiceRoleForAmazonEKSNodegroup" does not exist, the following IAM actions will be required by that entity in order to create it:

Additionally, the role must be granted with the following permissions over the roles that will be used later for the cluster creation (eksRoleARN) and for nodegroup creation (ec2RoleARN) statements:

The Amazon IAM service role for the EKS service (eksRoleARN) that will provide permissions for making calls to other AWS API operation must have the following policies attached:

The IAM service role for the EC2 service (ec2RoleARN) that will be used by the Node Group workers must have the following policies attached:

At this point you need to decide if you will configure the default AWS CLI profile or if you want to create a custom profile. If you create a custom profile some of the commands in the rest of the guide will require an additional parameter to specify the profile to use (--profile profilename) so for simplicity we will just configure the default profile in this guide. You can read more about named profiles in the  AWS Command Line Interface documentation.

Check that the <denodo-ecr> repository has been created successfully and obtain its repositoryUri from the output of the create-repository statement. The field repositoryUri will be used later to authenticate the local Docker client.

Finally, tag the Denodo image with the ECR registry and push it to the Elastic Container Registry.

The command that we will use to create the EKS cluster from the AWS CLI requires creating first the following elements that will be used in the command invocation:

Once we get previous requirements fulfilled, we can create the cluster with the following command by providing the previous parameters and a name for the new cluster:

It can take some time for the cluster to be available, it is possible to check the cluster status with the following command:

Once the cluster is ACTIVE, it is necessary to add worker nodes to it. These nodes are deployed in node groups, which are one or more Amazon EC2 instances deployed in an Amazon EC2 Auto Scaling group.

Adding Nodes to the Cluster

Amazon EKS clusters can schedule pods on different types of nodegroups or a combination of them:

For a comparison of the capabilities of each node management system you can check the EKS compute documentation.

In addition, the nodes of the nodegroups can use different Operating Systems such as Amazon Linux, Ubuntu Linux, Bottlerocket or a custom one although customizing the Operating System of the nodes may require using Self-managed nodes. Amazon does provide EKS optimized AMIs for some Operative Systems and instructions to build your own.

For the sake of simplicity, we have decided to use EKS managed node groups with Amazon Linux, but notice that the other options are also valid. The rest of the steps provided on this guide after the nodes are added to the cluster do not depend on how the nodes are managed nor the Operating Systems selected for them.

The command aws eks create-nodegroup creates the managed worker node group, but in order to create it the following information is required:

Once we get previous parameters we can create the cluster with the following command by providing a name for the new cluster and for the node group:

The node group takes some time to get ready, but it is possible to check the status of the node group with the command:

After this, the cluster should be running in AWS EKS. In order to connect to it with the Kubernetes CLI kubectl we can create the proper configuration in Kubernetes by executing the following command:

To check if the configuration is successful, connect to the cluster and get the nodes information with kubectl.

The Denodo Platform requires a valid license in order to start, which can be obtained from a Denodo License Manager server or in some scenarios (like evaluation or Denodo Express) as a standalone license file. In order to avoid static references, we can use a Kubernetes config map that will embed a Solution Manager configuration file pointing to the License server or a valid license file.

If we have a Denodo License Manager server running and accessible by the Kubernetes cluster then it can be configured as part of the Solution Manager Configuration.

First, we need to create the config map containing the Solution Manager configuration that will be referenced later from the denodo-service.yaml file:

After this, we can deploy the Virtual DataPort server in the EKS cluster. Taking as starting point the denodo-service.yaml from the Knowledge Base article Deploying Denodo in Kubernetes, we will have to update two sections of the base file in order to accomplish a successful deployment.

The first modification will consist in setting up correctly the image name, replace the following line in the denodo-service.yaml file:

Notice that the value of the placeholder <repositoryUri> was already obtained in a previous step and it refers to the login server address of your registry.

Hence, after applying the mentioned updates, the Denodo 8.0 version of the file would look like this:

NOTE: This YAML file only applies to the Denodo Containers released with Denodo 8.0 Update 20220815 and later.

On the other hand, this would be the denodo-service.yaml version for Denodo Platform 7.0:

Then, take the appropriate version of the denodo-service.yaml and deploy the app and service in Kubernetes with the following command:

Output from the execution of the get service command

Also, notice that in the YAML configuration file, we are specifying the hostname for the Virtual DataPort server as denodo-hostname, so in order to connect to the server from a VDP client, we will need to ensure that the VDP client is able to resolve this hostname to the public IP address of the Kubernetes service, and we can do that by adding an entry in our local hosts configuration file to map that hostname with the IP address:

The new entry in the Hosts file

Now we can open a new Virtual DataPort Administration Tool and connect to the server using the following Denodo Server URI: 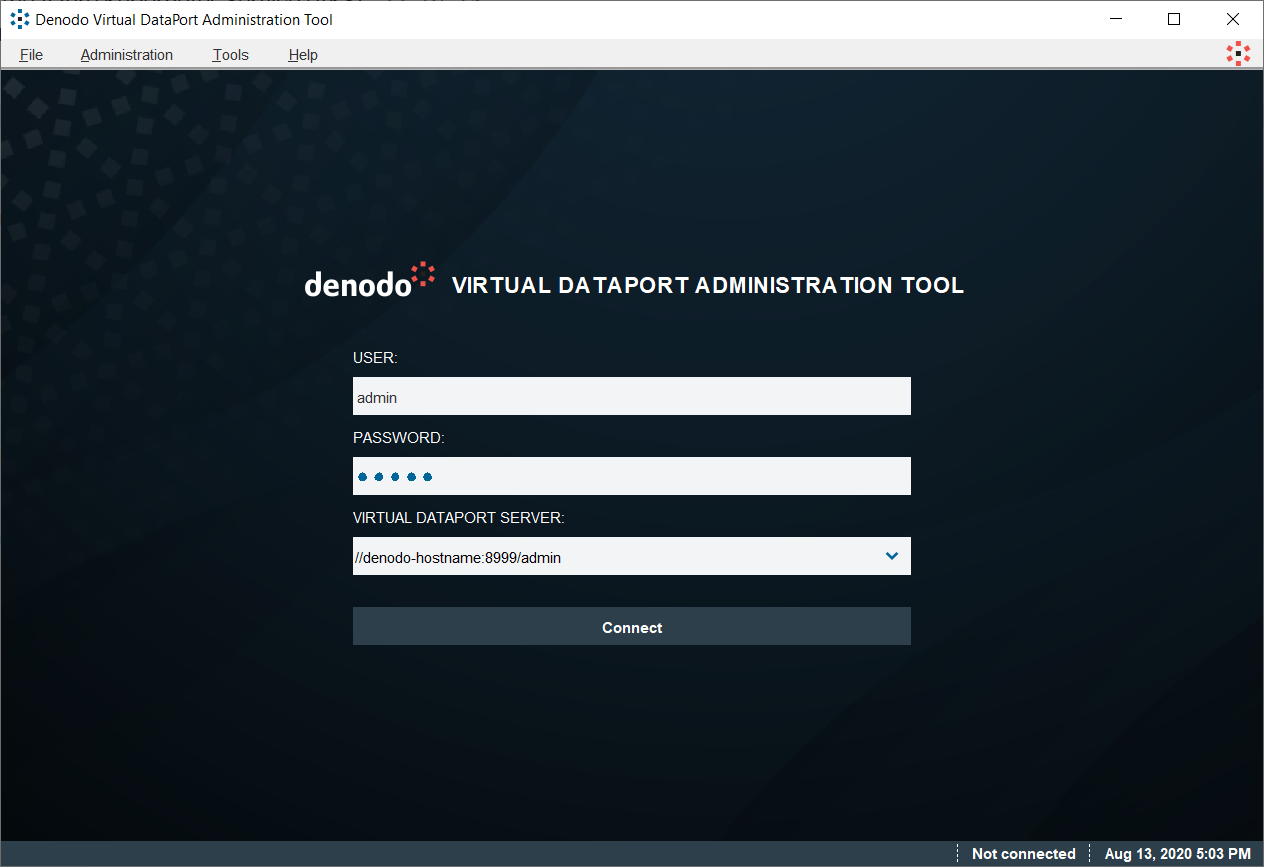 To use a standalone license file, we can use the following statement to create a map with the contents of the license file that will be referenced later from the denodo-service.yaml file:

Then, we need to modify the YAML file to load the license file in the Denodo installation folder <DENODO_HOME>/conf as it is done with the solution manager configuration. For this, replace the following part of the previous file denodo-service.yaml:

When a query is sent to Virtual DataPort, the connection open to the load balancer will remain idle while the query runs and there is no data returned back. By default, the idle timeout for the Classic Load Balancer connections is 60 seconds, so this means that by default, the queries can be running successfully up to one minute, after that, they will be closed by the ELB.

In general, we can expect Virtual DataPort to receive queries that will execute for longer than one minute, so in those cases, it is very important to increase the value for the idle timeout in order to avoid getting closed the connections from those queries.

The idle timeout issue can be solved by adding the following annotation to the YAML definition of the Denodo service. Notice that Kubernetes and AWS provide many annotations that can be used for tuning the load balancer created in the service. One of those annotations allows to change the default value of the idle timeout, for instance to 900 seconds: