Sometimes we may experience some problems connecting from Denodo Virtual DataPort to a JDBC data source due to external issues like network configuration or others that are not Denodo related. When a connection issue occurs, it is a good idea to isolate factors beyond Denodo at first to accelerate the troubleshooting process.

To achieve this goal, this document describes how to test a JDBC connection from a third-party lightweight JDBC client installed on the same host as Denodo Virtual DataPort to a JDBC data source.

The sample data from Data Virtualization Basics Tutorial will be used.  A database named acme_crm is created in a MySQL database along with three tables: address, client, client_type. 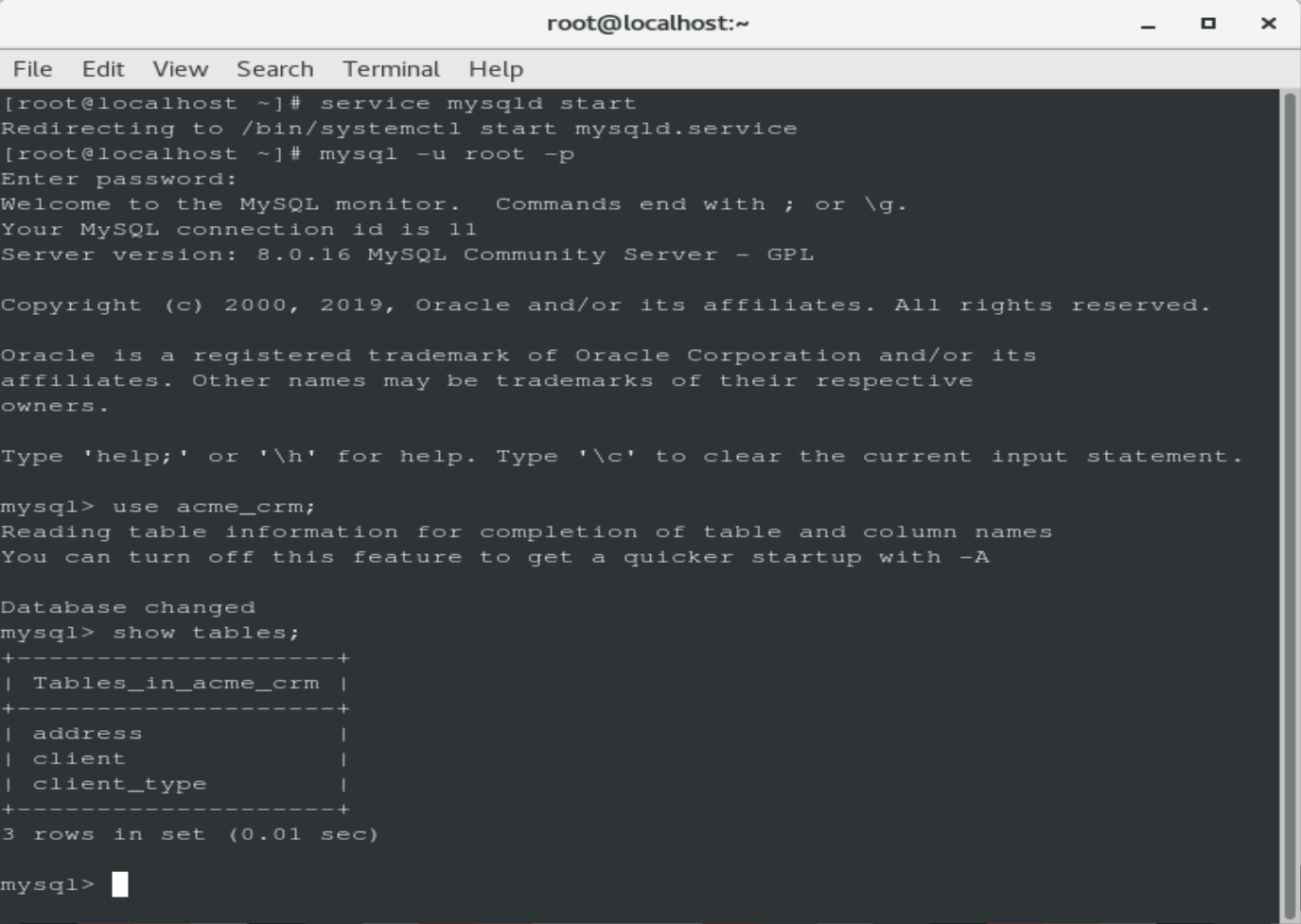 Jisql [ http://www.xigole.com/software/jisql/jisql.jsp ], distributed under the Apache License v2.0, is a Java-based utility that provides a command line interactive session with a SQL server.  This SQL client can connect to any database with a JDBC driver so it is a useful and convenient tool in order to interact with any JDBC data source from the command line in non-GUI environments.

The complete Jisql package (source code, Javadoc, build environment) can be downloaded from the project’s website at http://www.xigole.com/software/jisql/jisql.jsp

According to the online documentation Jisql has been compiled with Java 6 and it works perfectly with this version and newer ones. The reason Java 6 is required is a call to a Java6-only class (the Console class) but, thanks to the distributed package containing the source code and ant build files, this dependency could be removed with a simple change in Jisql.java to make it work with older versions of Java if needed.

Once you have downloaded the package you must unzip it and then copy to the generated jisql-2.0.11/lib folder the JDBC driver, in our example the MySQL connector jar file (mysql-connector-java.jar or equivalent) corresponding to the MySQL server version used.

The software distribution includes several runit script files (e.g. runit.bat) that can be used for easily executing Jisql. These batch scripts are for Windows systems. For Linux you can create bash scripts and modify the commands inside to suit your needs, e.g specify your JDBC connection strings and include the necessary .jar files into the application’s classpath. Here you have an example to run Jisql from Linux to connect to a sample MySQL database.

If you do not use the -input parameter, which executes commands from a file, the interactive command line will be opened and it will allow you to execute queries. To close the application you have to use the command quit or the command exit.

In order to run queries you can use the interactive command line or the -query parameter.  The former example is shown in the last section . The latter opens a connection, executes the query, shows the results in the command line and closes the connection.

Here is an example of command line using -query parameter: 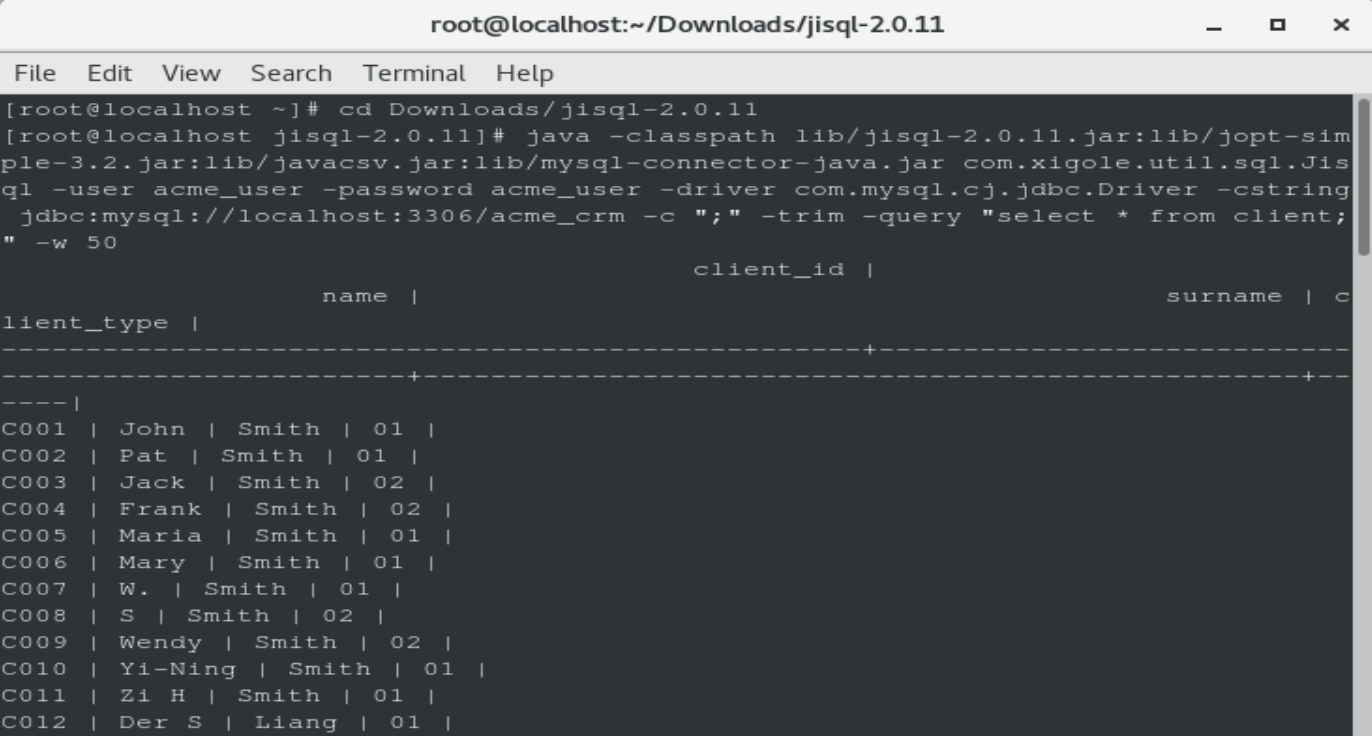 -classpath The elements that you have to add to your classpath. If it is in a different directory you have to write the full path.

-user The username used to log in to the database.

-driver The JDBC driver class name of the driver. In our case it is com.mysql.cj.jdbc.Driver .

-cstring The connection string to the database.  In our case it should be something similar to jdbc:mysql://localhost:3306/<database_name>.

-c The command terminator to use. By default it uses the string “go” on a line by itself to determine when to send the string buffer to the database. The semi-colon character “;” may be a better option so you should add “-c ;” to the command line.

-input The name or the full path of a file to read commands from instead of System.in.

-query An optional single query to run instead of interacting with the command line or a file. The query must be between quotation marks. For example, “-query "select * from client;"”.

-formatter There are three formatters that are included.

After making sure there is no issue with user permissions, this error could be related to the wrong command syntax for Linux systems. E.g Take into account that the jar files in the -classpath parameter need to be combined with colon instead of semicolon when running Jisql command from a Linux shell.

Could not create connection to database server. ErrorCode: 0

This error message occurs when the wrong JDBC driver is used in the Jisql command. You need to download and use the JDBC driver with the correct version for the database you will be connecting to.