Currently, Virtual DataPort does not include native support for spatial data types. However, this does not mean that we cannot read its content or operate with it.

This document explains how to deal with spatial data from any system that follows the Simple Features standard[1]  in Virtual DataPort, using custom functions. Specifically, this solution has been successfully tested with IBM DB2, Microsoft SQL Server and Oracle.

The Simple Features standard defines a model to represent and store spatial data. This model understands spatial data as vector geometries (point, lines, polygons…) of two dimensions. In order to interpret these geometries we need to know the spatial reference system in which their coordinates are expressed.

To import spatial data from Virtual DataPort, create a base view from a query that uses the Simple Features API to obtain these components:

The Figure 1 shows a query that retrieves both formal representations and the SRID from IBM DB2.

Figure 1 Query that obtains the WKT, the WKB and the SRID of a geometry from IBM DB2

The Figure 2 shows the same query, for Microsoft SQL Server.

The Figure 4 shows the result of executing the view.

Figure 2 Query that obtains the WKT, the WKB and the SRID of a geometry from Microsoft SQL Server

Figure 3 View that obtains the WKT, the WKB and the SRID of a geometry from Virtual DataPort

Figure 4 Execution of the view that obtains the WKT, the WKB and the SRID of a geometry from Virtual DataPort

If we do not need to know the value of the SRID, VDP allows us to create the base view from the introspection dialog (see Figure 5).

The Figure 6 shows how in this case, Virtual DataPort interprets the spatial data type as text.

As we can see in Figure 7, if we execute the view created from the introspection dialog, Virtual DataPort will provide the Well-Known Text of the spatial data as a result of interpreting this field as text.

Virtual DataPort currently does not include any function to deal with spatial data. However, the functions set of Virtual DataPort can be extended by developing custom functions that augment the operations it can handle[2] . In order to operate with spatial data, we can develop a custom function that reads a geometry expressed as WKT or WKB and performs whatever spatial operation on it.

Since spatial operations can be quite complex, we strongly recommend using a software library that provides the geometric operation we need. For example, the JTS Topology Suite is an open source Java library that implements the spatial functions specified in the Simple Features standard. It is freely available to download from http://sourceforge.net/projects/jts-topo-suite/.

As an example, Figure 8 shows a custom function that uses the JTS Topology Suite. The custom function is called st_distance and calculates the minimum distance between two geometries expressed as WKB. 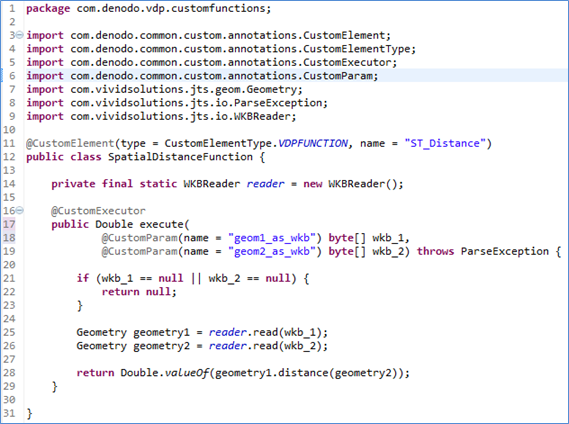 The Denodo Xtrafuncs for VDP library[3]  includes the custom function st_geom_to_struct, which is another example of operation that can be performed on spatial data from Virtual DataPort. This function receives a WKT or a WKB as input, parses it[4]  and transforms it in a structural representation of the geometry in terms of registers and arrays. The return type of the function has these fields (see Figure 9): 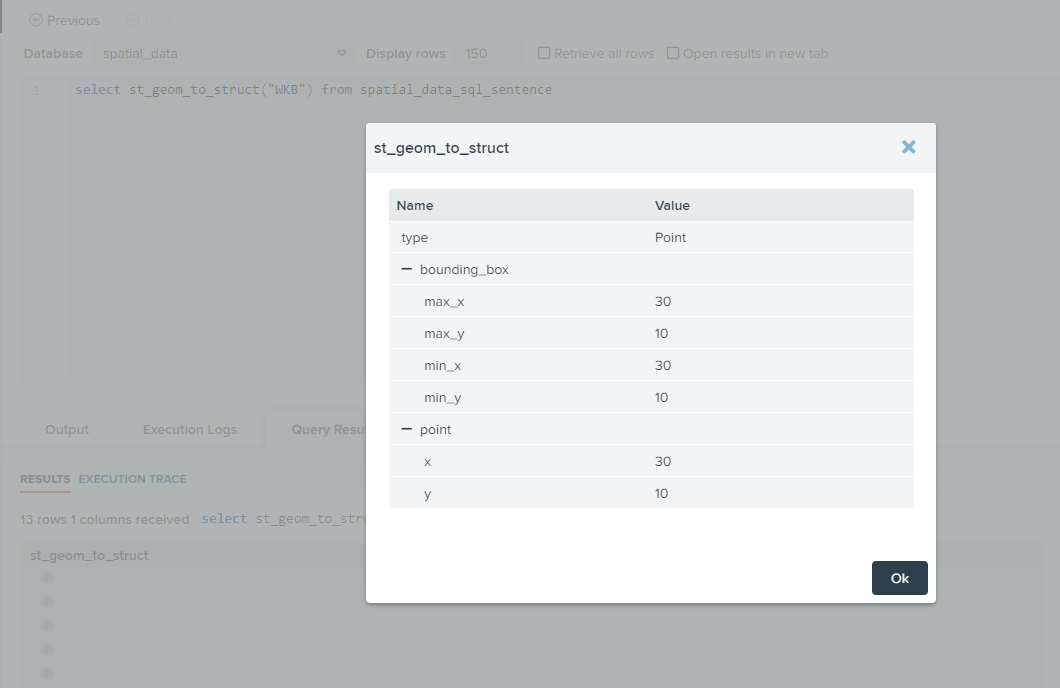 Figure 9 Return type of the custom function st_geom_to_struct for WKB

Use Case: Get the location of a picture

Let us assume a system of geo-tagging pictures where the pictures are displayed in a map according to where they were taken.

This example explains how to obtain the coordinates of the pictures by reading the spatial data as explained before.

First, we import the geo_picture table from the data source with the query shown in Figure 10. In this table, the location field stores the point in the space where the picture was taken.

Figure 11 View with information about the geo-tagged pictures

Next, we create a projection view over bv_geo_picture where the field location_as_wkt is replaced by a call to the st_geom_to_struct custom function (see Figure 12).

To extract the coordinates where the pictures were taken, use the query of Figure 14.

Figure 14 Query that obtains the coordinates of geo-tagged pictures

Use Case: Get the n-nearest pictures

One of the most common queries in a spatial system is to calculate the nearest neighbors of a geometry.

The Figure 15 shows how to create a base view from a query that obtains the nearest neighbors of a picture, ordered by the distance between pictures. This query depends on two parameters: the id of the target picture and the number of neighbors.

As in the previous example, we create a projection view over the view geo_picture_nn that uses the st_geom_to_struct custom function (see Figure 17).

The Figure 18 shows a query in Virtual DataPort that obtains the three nearest pictures to the picture with id 4.

Figure 18 Query that obtains the nearest pictures in Virtual DataPort

Imagine we have access to two different spatial data sources:

We assume that the spatial data in both data sources are expressed in the same spatial reference system. Our aim is to obtain the closest bus line for each point of interest in the city. Let’s see how to achieve it using Denodo.

First of all, we have to import the spatial data in Virtual DataPort using a query for each one of the data sources. The Figure 19 and the Figure 20 show the queries we have used to import the points of interest and the routes, respectively. Note that the fields location and route are geometries which are imported as WKB. 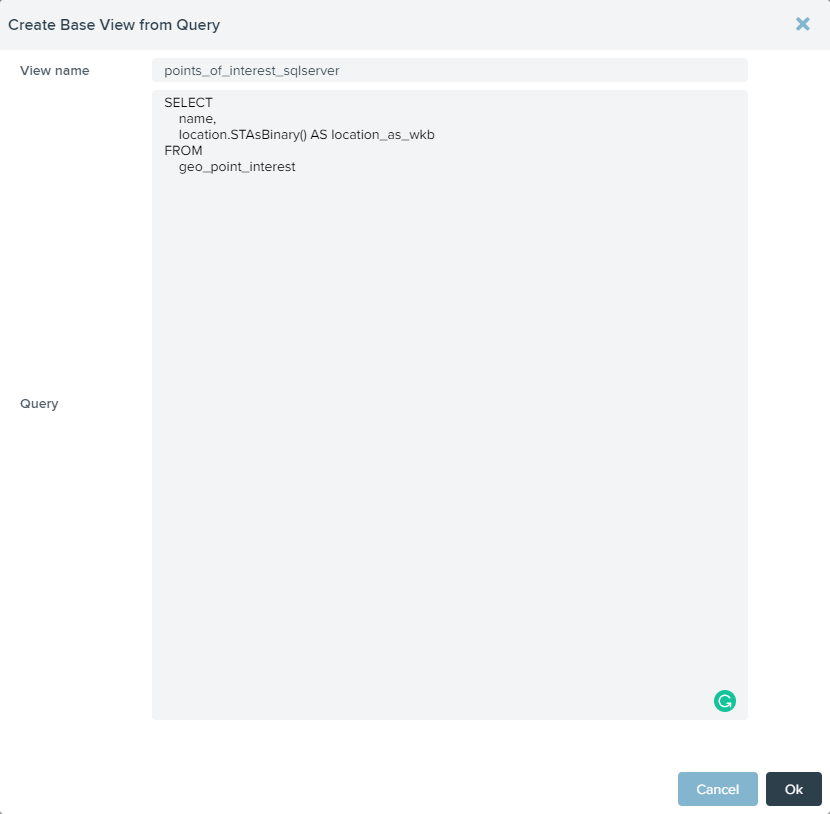 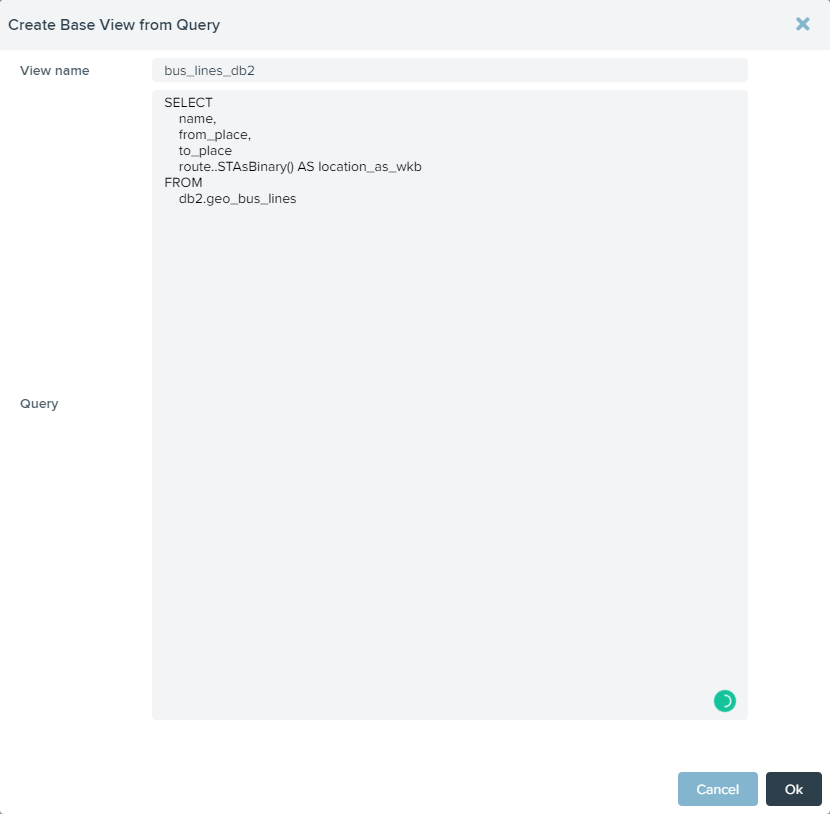 Figure 20 Query that obtains the bus lines from IBM DB2

The Figure 21 and the Figure 22 show the views that have been created in Virtual DataPort as a result of the previous queries.

Figure 22 View that obtains the bus lines from IBM DB2

Then, we have to create an auxiliary view that adds a new field to the view points_interest_sqlserver. For each point of interest, this new field, called minimum_distance, will contain the distance to the nearest bus line. This information will be used to obtain which is the closest bus line.

We need to calculate the distance from each point of interest to each bus line. To do this, we create a cross join view between the views        points_interest_sqlserver and bus_lines_db2 (see Figure 23). The results are grouped by the fields of the view points_interest_sqlserver because we need to obtain the minimum value of the distances for each point of interest (see Figure 24).

Finally, we calculate the minimum of the distances to each bus line (see Figure 25) and project it along with the fields of the view points_interest_sqlserver (see Figure 26). Note that we use the custom function st_distance defined in Figure 8 to calculate the distance between geometries from different data sources. The result is the view points_interest_with_minimum_distance shown in the Figure 27. 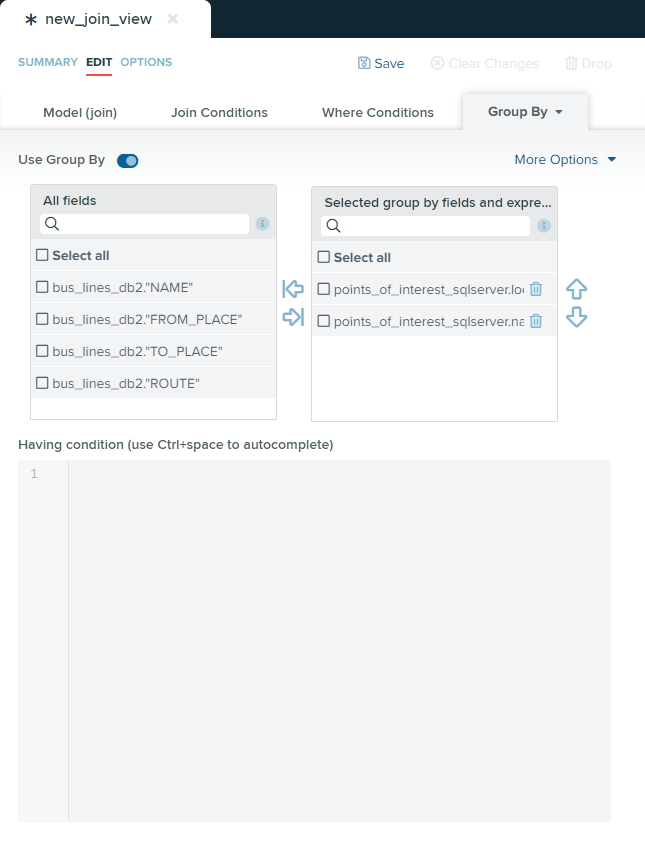 Figure 24 Group by tab of the auxiliary view points_interest_with_minimum_distance

Figure 25 New field of the auxiliary view points_interest_with_minimum_distance, which calculates, for each point of interest, the minimum of the distances to each bus line.

The query on Figure 28 obtains the closest bus line(s) to each point of interest in the city. Basically, the query is a JOIN between the points of interest and those bus lines whose distance coincides with the minimum distance.

[3] The Denodo XtraFuncs for VDP library is available to download on the Denodo Connect section of the Denodo Support Site.

[4] To parse the input expressed as WKT or WKB, we have used the library JTS Topology Suite.